Mary Wagner, author of Kelsey Hates the Needle, and a guest star from Paw Patrol joined patients at Nemours DuPont Hospital for Children last week.  Mary was able to read aloud, spread joy, and donate books.  The patients were grateful for the visit, but we were grateful for the chance to help other patients from DuPont Hospital as they have helped Kelsey so much through the years.  Days there are not always easy, but kindness and generosity can go a long way.  Thank you for making a difference Mary. 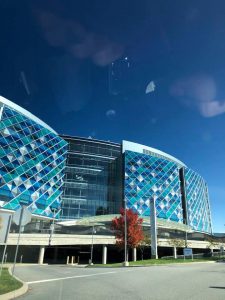 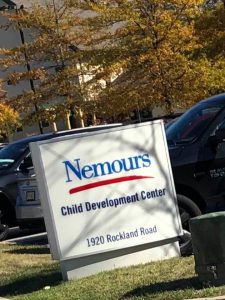 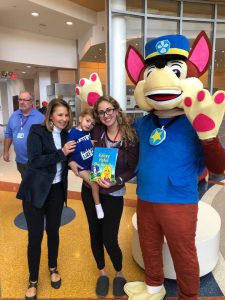 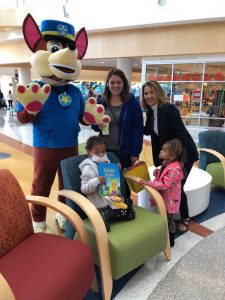 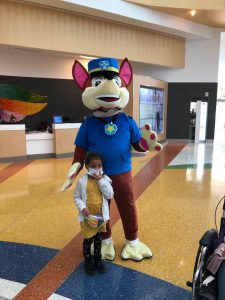 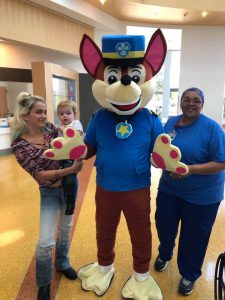 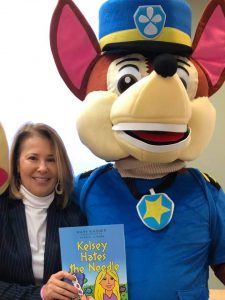 Routine lab work, it seemed.  We scheduled our time as usual and showed up with our appointment to avoid lines or waits for Kelsey.  On average, Kelsey has to draw between  6-21 vials.  Though that sounds alarming (and sometimes looks equally as alarming), we are as used to this procedure as possible at this time.

Kels likes to talk as she awaits the needlepoint.  She typically handles herself so maturely that she does not even require a handhold.  Sometimes, she likes to do so just for added security.  This weekend, she said, “I’ve got this.”

The technician was surprised by Kelsey’s wit and conversation and we sign the papers and verify the information.  She was also delighted with Kelsey’s mature conversation and positive attitude upon sitting in the chair.  “How old are you?” she asked repeatedly with the joyful young woman who sat before her in the chair.

Suddenly, Kelsey’s face changed as the needle went into her arm.  Nothing was coming out… she said softly yet firmly, “It hurts so much,” as a tear ran down her cheek.

The technician called for assistance and looked nervous.  We all tried to stay calm.  I shot a look of concern to the technician as Kelsey grabbed a hold of me tightly.  Something routine turned into a scare in a matter of seconds.

Within a few minutes, it was over.  The vein was properly identified and the vials were full.  Inside, I was shaking and alarmed, but outwardly praised Kelsey and held her tightly.

Before we left, the technician stopped Kelsey to say, “Thank you for showing me such grace today.  Many adults would not have been able to do that.”

Brave has become a past time for Kelsey.

When we got in the car, tears filled my adult eyes and Kelsey ripped off the band-aid to “forget about all of that.” #thisishowIbrave she said with her BRAVE headband on and a smile.

Guess My Trait- write a paragraph about a character’s thoughts, words, and actions that convey the trait you have been given.  Can you guess the trait that Kelsey’s brother described? 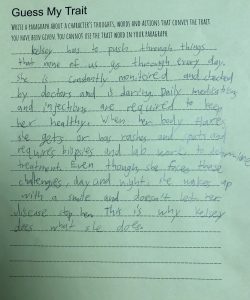 Kelsey has to push through things that none of us go through every day.  She is constantly monitored and checked by doctors and is daring.  Daily medications and injections are required to keep her healthy.  When her body flares, she gets or had rashes and spots and requires biopsies and lab work to determine treatment.  Even though she faces these challenges, day and night, she wakes up with a smile and doesn’t let her disease stop her.  This is why Kelsey does what she does.

Brave can be anything to anyone.  Getting out of bed, driving in a storm, prioritizing, receiving an injection, or enduring a hard day are a few examples recently heard about how one overcomes and braves through the day.

We are brave and so are you.

We nominate you to tell us how you brave!

Nominate 3 people to support Kelsey and rare diseases everywhere.  Show us how you brave!  You have 3 options:

1. Tell us how you brave with #thisishowIbrave

The BRAVE headbands have given Kelsey and her brother a true sense of support and a feeling of kindness.  Then, Kelsey’s incredible school librarian included us in the evening book fair last night.  We sold 35 books and 60 headbands to further increase our outreach and raise awareness in our community.

We are grateful for all who have helped and supported us in September, which brings us to October.

October 1 brought the launch of #thisishowIbrave.  Kelsey’s nominations will be in soon to start the fun and help the world see how brave each of us can be.