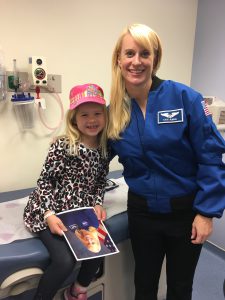 When you receive a phone call from the National Institute of Health stating that an astronaut who studied DNA in space for four months would like to meet your daughter, you pause.

You breathe.  You realize the gravity of the moment that has been presented to you.  You are in awe.  You make it happen.

Kelsey and her brother were able to meet Dr. Kate Rubins, the first astronaut to sequence DNA in space, and it was as amazing as it sounds.

Kelsey was given an opportunity to speak with Kate and ask her questions one-on-one.  Kelsey and her brother each read Dr. Rubins’ biography in advance and each came prepared with 6 thoughtful questions to ask her.

The questions ranged from how did Earth look from the space station, what kind of food did you eat up there, were you ever scared, and when did you decide to become an astronaut?

Dr. Rubins was poised, patient, wise, and a true role model.  I would have hand picked Dr. Rubins for my children to meet.  She, however, picked us.

During the NIH Astronaut Presentation with over 400 audience members are 2,000 live streamers, I sat in true amazement of the moment.  We were in reserved seating as we listened to a first-hand account of a four month space mission from launch to landing and saw that Dr. Rubins is making her dream come true.

Over dinner, Kelsey announced that today was the best day EVER!    She thought it was incredible that such a confident, intelligent, and clever girl wanted to meet her.  As I listened to Kelsey recount the day and all that she learned about Dr. Rubin’s work and missions, I could not help but think that as well.

We recently attended a huge egg hunt with a myriad of kids and parents.  It is an annual tradition and we usually have a blast.  This year, a variety of circumstances changed and as a result, so did the hunt.  This fun-filled tradition ended up being full of life lessons rather than laughter.  That leads us right to the rules of life and the lessons learned from the egg hunt.

We made it with only a few minutes to spare.  Traffic happens, life happens.  Be ready, but be on time.

The early bird does get the worm.  Those minutes to spare put us far back in the line-up.

However, I taught my children to be polite and wait their turn.  When the bell rang to initiate the hunt, all of the children would all be in the same place.  “Just be patient and wait your turn,” I reminded them.

My two children did just that.  They were so excited.

Rule 2: Everyone does not follow the rules.  Do not let a poor example ruin your day.

One minute before the bell rang, a parent not only placed herself in front of my children, but also moved her children in front of mine as well.

What was I to do?  Decisions decisions… It was a trying moment for me (to say the least), and I had many phrases in my head that I did not want my children to hear me say.

It was a moment to display self-control.  I took a deep breathe and loudly stated my apologies that not everyone in life plays by the rules (as steam was likely coming off of my scalp)!

I smiled and told them to have fun!

Rule 3: Be your own advocate and speak up when necessary.

Seconds later, the bell rang.  That woman was a steady blockade to both of my children and unfortunately the crowd had no other holes for my children to sneak through.  I had to step in at that point, politely excuse my children, and get them into the hunt!

My children were watching my every move carefully, and I had to decisively think through my every word and action.

My words needed to echo what I want them to know and learn in life.  “Careful what you say, Children will listen…“

Rule 4: You can’t always get what you want.

Minutes later, the hunt was over.  My son was easy to spot.  He had very few eggs but wore a smile anyway.  My Kelsey was harder to locate because she was persistent and still on a mission to find a single egg to call her own.

It did not happen.

Kelsey came out of the hunt completely empty handed.

I was certainly rethinking my earlier patience, but also reminded myself that this was a teachable moment.

Rule 5: Your family will always be there when you need them.

Consequently, those minutes and my patience cost Kelsey her eggs this year.  Her will was strong and her determination fierce, but with an empty basket, all she could do was run to me for a secure embrace.

I could not come up with an egg.   They were gone within two minutes.  I could only share the hug and tell her that there would be many more fruitful egg hunts in her future.  There will be.  I know that.

It did not help.

With that came her brother to offer her a few eggs of his own.  He only had 6.  It was a rather precious moment.

I may have allowed a mom to block my children, but I also had a few tears of pride when my son shared his eggs.

A brother was there for his sister.  I must be doing something right.

Rule 6: Sometimes, a kind gesture happens when you least expect it.

At that precise moment (I kid you not), the same woman who blocked my children walked by with the largest basket around.  It was overflowing with eggs…  Boy was it hard to hold my tongue then and there.

I had to repeat, “Careful what you say, Children will listen…“

So I instead looked the other way, literally.  It was all I could do to remain calm.  What I saw when I chose to look at the situation differently was an entirely different perspective.  I saw a very thoughtful parent and sibling pair approaching my emotionally charged scene.  Her children had baskets with plenty of eggs, and I guess she watched our dramatic finish because her children offered some of their eggs to mine.

When one door closes, another one usually does open and the results are usually worth it.

Take a moment on this beautiful week to savor the sun and the beauty around.

My sweet baby girl reminded me to do so this morning.

She climbed into bed with a smile on her face and said, “Mom, I need you to open your eyes and look at something special.”

“What is it?” I said through foggy lenses.

She was pointing to a reflection that the sun was creating on the wall.  There it was, glistening with every color of the sun.  The only way to describe the colors and the patterns shining through the curtains is to think about the inner workings of a kaleidoscope.   I would never have noticed it if she had not pointed it out.

“Yes, Kelsey, it is.”  It truly was magnificent.

A morning reflection I would not have stopped to recognize otherwise.  Stop and recognize the beauty today, bask in the light of the sun, and smile.

My daughter endures so much, but she always stops to see the beauty in all around her.  She teaches me so much every day.

Joy in the form of a twirl…

What grace!  What enthusiasm!  What fun!

This inspiration from my six year old came shortly after the news that we are ceasing the daily injections for the time being.  Words cannot express the weight I feel has been lifted from our morning routine and daily comfort.

The overall result may have been full of joy, but interestingly, Kelsey first asked to continue the medication.

Her daily frustration…  Her day of double dose torture…

Her daily pain was actually asked for by request.   This medication must make her feel so great.  The knowledge of that was powerful and difficult to discuss aloud.  “I feel really good when I take it” was her rationale.  That sound logic had me question the entire situation.  So with the new relief comes a bit more worry.

For now, I smile.  I watch with amazement and a breathe a huge sigh of relief.  The weekly injection seems easier knowing it will be another seven days before I have to give it again.

Today, my daughter is my inspiration.

Her twirl is sheer joy.