Kelsey Hates the Needle available at Amazon and Barnes and Noble 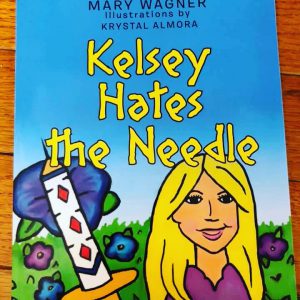 What is PAN?
PAN (Polyarteritis Nodosa) is a rare and potentially fatal disease that affects small and medium arteries resulting from blood vessel inflammation (vasculitis) causing injury to organs. Vasculitis may cause the inflamed blood vessels to weaken or stretch in size. Such weakening can lead to aneurysms or rupture with bleeding of the vessel into surrounding tissue. Vasculitis may also cause blood vessels to narrow so significantly that organs once supplied by such vessels may be damaged from a loss of oxygen and nutrients. Most commonly, PAN results in injury to the nerves, intestinal tract, the heart or the joints. PAN can result in kidney problems when the blood vessels to the kidney are affected resulting in high blood pressure and an impairment of kidney function.

DADA2 — deficiency of the enzyme ADA2 (Adenosine Deaminase 2) — is a recently discovered and extremely rare genetic disease that usually starts in childhood. It can cause recurrent strokes, severe systemic inflammation, immune deficiency, and damage to many of the body’s tissues and organs.

Who is Kelsey?
Kelsey is the face of Polyarteritis Nodosa and dada2.  For three years, Kelsey lived with an unknown chronic illness, and her family endured great heartache trying to figure out a diagnosis.  Her symptoms began with a long lasting fever spanning about two weeks, eventually resulting in a two week hospitalization for a “fever of unknown origin.”  Over the course of the next few years, Kelsey continued to display physical symptoms and was carefully monitored and tested as a result.  She was diagnosed with PAN at age 3.

Kelsey is now ten and she is our superhero.  She possesses qualities of bravery, courage, intelligence, and strength.   At first glance, she is an enthusiastic picture of health and wellness.  Like most superheroes, Kelsey has a weakness.  Superman has kryptonite.  Kelsey has PAN.  She has already fought many battles and is monitored constantly to assure that her body is not fighting against itself.  Kelsey cannot fight this battle alone.

Why Kelsey’s Kaleidoscope, Inc.: A New View for PAN? Why now?

When Kelsey was finally diagnosed after three years, her family was relieved to finally know what was wrong but were discouraged to discover that very little is known about children’s PAN, dada2, and treatment options. It can be devastating to watch someone you cherish struggle without feeling helpless. Kelsey’s family founded this organization in order to raise awareness and money for PAN, determine alternative treatment options, assist other affected families find help and one another, and eventually find a cure.

Superheros always win in the end.  Let’s help fight PAN and dada2 together.

For our superhero and those we have yet to meet:

To help our fighter and those we have yet to meet: