I look outside and see a serene and still sky.  It is the moment that exists just before a bolt of lightning illuminates the sky.  The calm before the storm resonates and reminds me of the personal storm that swept me away in November, 2011.  The darkness slowly creeps in through my windows, just as the pain brewed gradually inside of my daughter during that fateful month.  I shed a few tears as the first raindrops fall tonight thinking about the pain that my nine-month-old child must have been experiencing and how unaware I was that it was developing so quickly.

Advil was constant in an effort to ease the “teething” pain I knew in my heart was not the culprit.  Each morning, I awoke hoping and praying that this day would be different.  I would think, “this morning would be the one that finally brings us back to normal.”  Instead, the burning hot patches and fever persisted.

Another call to the doctor assured me that teething was still at the root of the problem and it should only be a few more days.  Thus, the holiday season began with Thanksgiving.  I typically love this time of year, but that November I felt numb.  It was difficult to even crack a smile with the heavy weight of my worry.

On November 24, we traveled to a relative’s home for the holiday.  Kelsey slept through most of the two hour ride.  Yet when we arrived, I felt that she never fully awoke.  Her eyes were glassy, her body was warm, and her legs were likely filled with unbearable pain.  I held her close and tried to act as if everything was normal.  In direct contrast for me to see was Kelsey’s cousin, born just three days before her.  He was crawling around, full of energy, and alert for the duration of the day.  I sat and held Kelsey as family members asked what was wrong.  The difficulty was that I did not know quite what to say.  I recall lying, “the doctors tell me it’s bad teething pain.”  They all hoped the same and lied right along with me.

As I now listen to the storm beginning to churn outside, it is clear to me that I should have seen the same clouded vision happening within me.  The sky is now dark and heavy just as my mind was for a few days following Thanksgiving.

The first bolt of lightning strikes exactly as a jolt seemed to hit me on Monday morning.  I had enough.  Something was wrong, and I could not deny it any longer.  I scheduled an appointment and demanded more.  I also requested a different doctor than those I had seen before.

A fresh set of eyes met my troubled gaze that afternoon.  Though as I recall, he stared at me without concern or fear, but rather annoyance with my worry.  He did at least listen to me and agreed that we should have blood drawn to erase the fear of anything serious.

My husband took Kelsey for the first draw.  I did not think I had the courage to be there with her.  He held her tightly as she screamed in agony.  I remember him telling me how deeply she wailed and being so grateful that he was able to be there to hold her.  “I would not have been strong enough,” I thought.  It’s quite ironic to think about it all now as blood work is a necessary norm in our lives.

Though I did not do what my motherly instincts knew were best immediately, at least we were on our way to some type of answer.  We just had to learn the results of the testing and a decision would be made from there.  I packed a bag for Kelsey and me because I knew where we would be headed.

The calm was over, as was my denial, and the real storm was just about to begin. 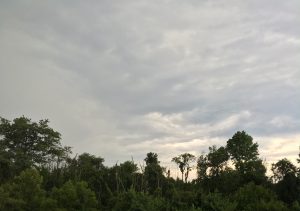 4 thoughts on “Calm Before the Storm”