Back in 2007, before I had a clue about parenting or life’s true requirements of working and being a parent, Brendan and I talked about having at least three, maybe even four, children.

As 2009 brought us the absolute joy of a baby boy and 2011 delighted us with our baby girl, we had too many blessings to count and ample reasons to be grateful.

We had an incredible second mother watching our babies during the day and we would talk about our family wants and needs while surrounded by them at night.  Every couple is different and there is no right or wrong.

Watching friends struggle to conceive or suffer a loss has been difficult to say the very least.  I will light my candle at 7 p.m. on October 15th to honor Pregnancy & Infant Loss Awareness Day for that reason.  I am blessed not to have experienced that pain myself.  However, I must say that the fear of those losses and the many women I have known endure them started a conversation one night soon after Kelsey was born.

Brendan and I decided to table the talk of a third child until after Kelsey’s first birthday.  As it turned out, we spent most of December at DuPont Hospital just before her milestone birthday rolled around.  The idea of a party was completely out of our minds.  I could not have pulled off Kelsey’s first birthday without my mother’s help.  She took over the details and even hosted the celebration.  Though I was still full of concern and uncertainty, I had a lot to be grateful for that year, too.  And so we celebrated thanks to my mom.

Reality set in regarding our family growth and how the uncertainty looming over us made it too difficult to consider bringing another child into the world.  We sadly decided to close the door on expanding our family.  It was a tough decision to make as a couple who adores children.  Difficult as it was, we remained grateful for the two beautiful lives we had created.  We are still grateful every day for those gifts.

Five years later, the idea of a dog came from my son.  We have worried about him throughout this summer and how he would react to Kelsey’s Kaleidoscope.  He is truly incredible and usually full of joy.  But we never want to leave him out and often wonder what the past five years have done to him.  Hopefully, it has changed him for the better and given him an appreciation of health and love.  However, at only seven, it is realistic to think that there is a part of him that may resent all of our efforts purely because he can not understand them.  In fact, we have done our best to withhold the truth from him because he is, in fact, just seven.

Whether it was that idea heavy on my mind or a feeling of incompleteness as a family, we came home with a Cockapoo.  My little Star Wars fan named him Luke Skywalker.  I look at Luke now, sleeping like a baby next to me.  He is serene and tranquil under a blanket that both of my children were tucked under as babies.  Kelsey actually gave it to him from her “baby doll” collection the night we brought him home.

Many equate puppies to babies, and though a puppy could never fill the void of another child that I sometimes feel, Luke certainly helps.  He is a reminder of the struggles, joys, and early wake-up calls that babies tend to bring near.

They say that time heals all wounds.  Licks from puppies go a long way in providing healthy distractions at times when we really need them, too.  A quick game of fetch after a long day also helps the reality of life fade away for just a few brief moments.

Thanks for the distraction, the licks, and the love Luke.  May the obedience be with you. 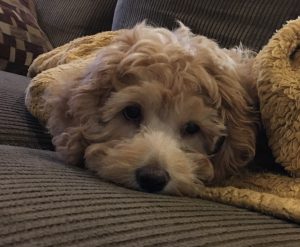