June 10, 2014 is a day that I have tried to forget every day since.  I remember the moment that Kelsey’s doctor walked into the room with eyes that said too much.  I knew that this would be the beginning of the journey, and I have gone through the motions of anger, denial, exhaustion, and depression since.

If not for my mom on that night, I think I would have broken.  Instead, when I went to pick up my son, I was given a dish of pasta and a goblet of wine.  I could barely stomach either nor the words to speak all that I had learned at 5:05 PM.  I wondered if it was the terrible nightmare that kept me up at night every evening since I knew it was a possibility.  “Polyarter…er… I guess I should learn how to pronounce this,” I thought.

I googled the entirety and read the very little that was written on the disease, especially for a three year old.  The New England Journal of Medicine provided the most detailed account of the new findings and patient studies to date.  Though little was written, I found that the more I read, the less I could handle.  I could barely get out of bed.

As you may be thinking, the days, weeks, and months that passed following the first steroid dose and the booked chemotherapy appointment were a battle.  We finally had a diagnosis and a plan, and for that I was grateful.  The National Institute of Health saved us the side effects of the chemotherapy infusion by offering us the option to use Enbrel instead as a TNF blocker.  The doctors had good reason to believe that it would improve Kelsey more than chemotherapy and virtually eliminate the risk of stroke, “as long as we can stay ahead of the dose,” they cautioned.

Always stay ahead of the dose, we try.  Sometimes staying ahead feels like lagging behind, and it was for that reason that my family and I finally decided that our silence was only causing an implosion of worry and pain.  To stay ahead, we need more.

Therefore, on June 23, 2016, I truly began to open up about the feelings and struggles I had endured as a mother.  If you read this post or have read others, I thank you.  I have found a great deal of strength through the keys of this keyboard and the kindness of many who do not realize its effects.

September 11, 2016 is another key day on my journey for Kelsey.   A heavy day for our nation that evokes sorrow, hope, and patriotism.  The fifteenth anniversary of a difficult memory now holds a new place in my heart, too.

Maybe it was watching the footage of the twin towers with my son that morning that started the nausea.  Or perhaps it was the reality that today would be the day my family’s mission became a public reality.

As easy as it is for me to type our tale and share it behind a computer screen is as difficult as it is for me to openly discuss my feelings.  September 11, 2016 would force me to do that as Pat’s King of Steaks allowed us to host Cheesesteaks for Kelsey.  Words cannot truly express what an incredible day it was for my family.

The support, love, and generosity of family members, friends, and strangers near and far, was truly unbelievable.  Some I have never met, some I have not seen in seven or thirty years, and some just a few hours.  With each new smile, $1.00 donation for a bracelet or through your purchase of a steak, you showed my family and its mission support.  The shades of blue I have felt for two years started to turn a more purple hue.  We cheered the Eagles on to victory and then had four beautiful cheerleaders grace us with their spirit and support following the win.  It was a mix of green, red, white, blue, purple, and pink.

If you called, texted, came in person, bought a bracelet, or thought about our efforts on Sunday: THANK YOU.  I always tell my kids that they can move mountains, just as Dr. Seuss has told me for many years.

Today, I am starting to believe that maybe I can, too. 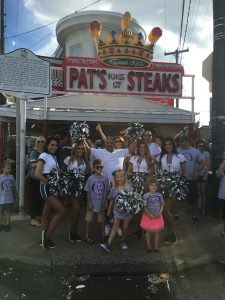 3 thoughts on “Wit Us All the Way”